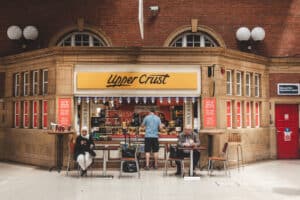 The airport and railway caterer behind Upper Crust and Caffè Ritazza has predicted that passenger numbers will not return to pre-Covid levels until 2024 as it tapped its shareholders for £475 million of new funding.

SSP Group, which a year ago raised £216 million of equity to bolster its balance sheet, said that it had secured an 18-month extension to its bank borrowings to January 2024 and waivers of the covenants on those facilities.

The company said that the equity and debt arrangements would “position SSP for the next phase of the pandemic”, giving it the firepower needed to invest in the business as the travel market recovers.

The measures would also “protect the business if the global travel sector experiences a more prolonged recovery from the pandemic”. SSP said it was confident in the “medium-term” outlook for its markets, but acknowledged that the nature of the recovery remained uncertain.

Despite strong progress on global vaccination programmes, lockdowns and travel restrictions meant that the pace of the recovery this year would be behind its previous expectations.

The rights issue comes against the backdrop of a struggling travel market. Airports have become ghost towns as a result of ever tougher flying restrictions and quarantine rules, and railway stations are taking a hit from the absence of commuters, shoppers and tourists.

SSP, once part of Compass Group, operates about 2,800 outlets at 180 airports and 300 railway stations in 35 countries. It operates its own brands, such as Upper Crust and Camden Food Co, plus franchises such as Burger King and Starbucks.

Before the pandemic shut most of its operations, its 40,000 workers served about 1.5 million customers a day, but most were put on furlough as the company grappled with what Simon Smith, SSP chief executive, called “a crisis like no other”.

In June he announced up to 5,000 job losses in Britain, with total redundancies across the group of 14,000. Total operating costs were reduced by £584 million, or 66 per cent, in the six months to the end of September.

The rights issue, which SSP admitted last month that it was considering, will give its shareholders the right to buy 12 new shares for every 25 they already hold at a price of 184p, a discount of about 37 per cent.

While the proceeds would cover its liquidity needs in a “reasonable worst-case scenario”, under its “base-case scenario” there would be up to £400 million extra to invest in the business, with any surplus cash returned to shareholders.

In an update on current trading, the company said that it expected revenues in the six months to the end of this month to have fallen by about 80 per cent compared with the same period last year.

It said that at these very low levels its cash burn would remain at £25 million to £30 million a month.