LEGAL GENDER EQUALITY in the Philippines regressed as no new reforms were implemented since late 2019, a World Bank study showed.

The World Bank’s Women, Business and the Law (WBL) 2021 report, which identifies the laws and regulations restricting economic opportunity for women across 190 economies, showed the Philippines’ score stood at 78.8 out of 100. This was lower than its 81.3 score in the previous year’s report.

Despite the dip, the Philippines’ latest score remained higher compared with the global average WBL score of 76.1 and East Asia and the Pacific region’s average score of 71.9.

The Philippines scored 60 out of 100 in marriage, parenthood and assets; 75 in mobility and pension; and 100 in workplace, pay and entrepreneurship.

However, the Philippines did not adopt new policy reforms or made significant changes to existing ones during the period, according to the World Bank.

The World Bank noted the Philippines is one of the countries, along with Montenegro and Pakistan, who created online platforms for women needing help, especially related to gender-based violence.

“Diverse responses to domestic violence such as these are fundamental, but prevention measures, which are equally essential, are largely absent. Governments still have room to enact measures and policies aimed at addressing the roots of this epidemic of violence,” the World Bank said.

Of the 190 economies tracked, only 27 nations recorded policy changes during the period.

Across the globe, the World Bank noted progress in adopting policy reforms towards gender equality slowed down in 2020, compared with previous years.

“Still, many laws continue to inhibit women’s ability to enter the workforce or start a business. On average, women have just three-quarters of the rights of men. New measures may also be necessary to safeguard their economic opportunities during this time of crisis,” it said.

Higher-income economies still led the overall improvement in gender equality with an average score of 85.9. Only 90 nations saw their higher scores in this year’s index.

“Progress in the rest of the world was slower during 2020, with other regions recording fewer reforms than in previous years,” it said.

The World Bank also said the lasting social and economic impacts of the coronavirus pandemic would affect men and women disproportionately, with the women appearing to suffer more.

“Because they make up the majority of health, social service, and unpaid care workers, women are uniquely susceptible to the effects of the pandemic. In addition, women continue to earn less than men for the same work, as well as face a higher risk of violence in their homes,” it said.

The report is the seventh edition since the bank started releasing its Women, Business and the Law series in 2009. — Beatrice M. Laforga 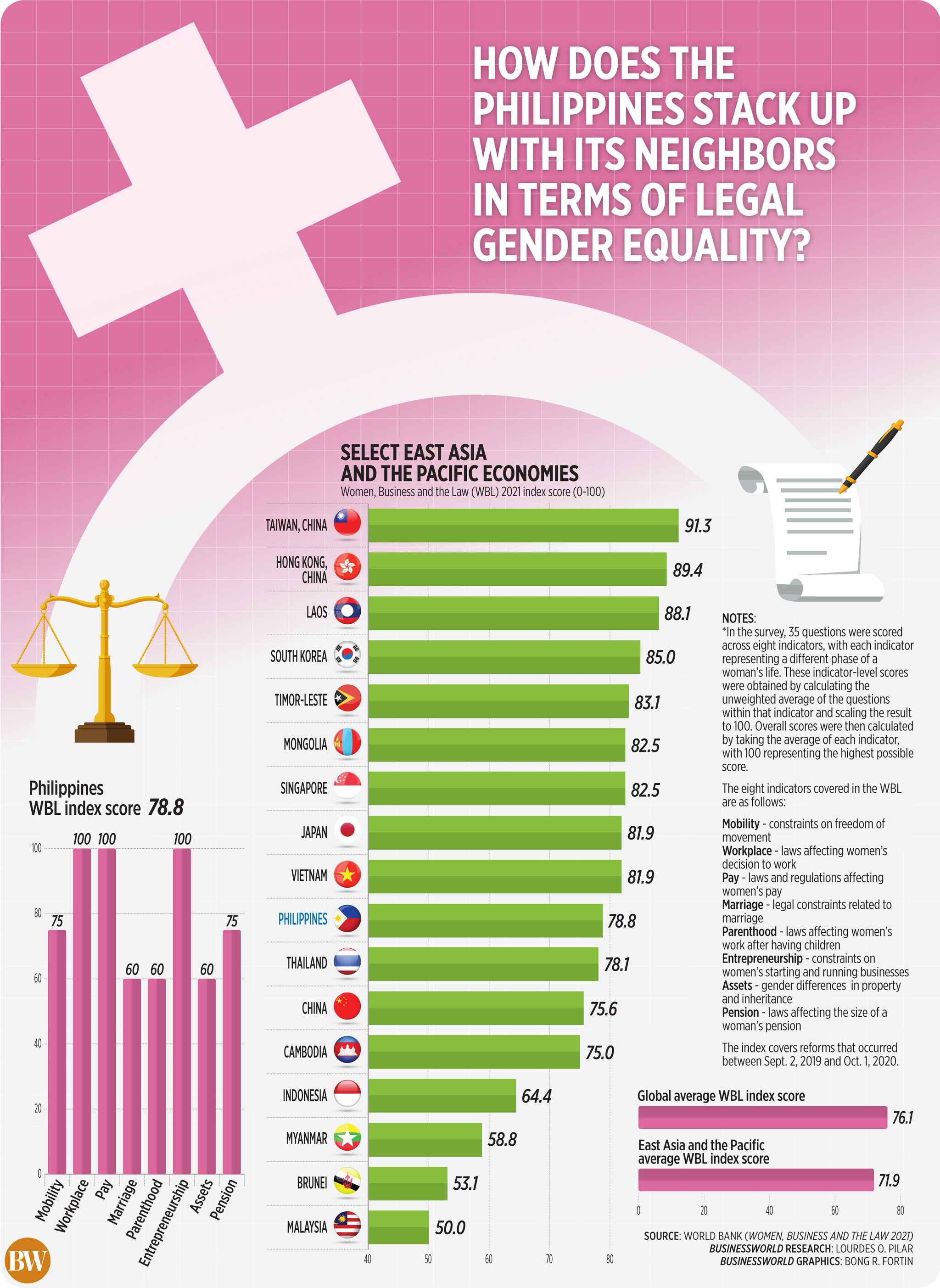