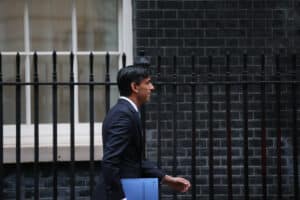 Public sector borrowing reached another record high in January as the government battled to protect the economy from the third national lockdown.

The debt grew by another £8.8 billion last month, according to the Office for National Statistics. This was the highest ever figure recorded in January since monthly records began in 1993. It was also the first January deficit for a decade.

Although the costs of the lockdown continue to soar, the January figure was substantially smaller than the £24.5 billion forecast by economists. At £80.3 billion, tax revenues were only marginally smaller than the £81.1 billion registers in January last year. The deficit was driven by a leap in spending from £62.2 billion to £81.9 billion.

The latest increase takes public sector borrowing in the ten months to January to £270.6 billion, £222 billion more than in the same period last year. The ONS said that government gross debt stood at around 100.6 per cent of GDP at the end of January.

That figure is likely to hit £400 billion by the end of the financial year and the chancellor has already begun thinking about ways to stabilise the public finances. He is understood to be considering plans to raise capital gains tax rates and reduce the size of the personal income tax allowance.

Speaking after the latest figures were announced, Rishi Sunak said: “We’ve been able to respond comprehensively and generously through this crisis because of our strong public finances. Therefore, it’s right that once our economy begins to recover, we should look to return the public finances to a more sustainable footing and I’ll always be honest with the British people about how we will do this.”

Sunak is due to deliver his budget on March 3rd but economists have urged him to avoid withdrawing economic support prematurely and to refrain from imposing tax rises.

Paul Dales, economist at Capital Economics, said: “With the economy contracting, the chancellor should resist the urge to try to claw back some revenue in the Budget on 3rd March and instead continue to support the economy.”