Companies draft ‘no jab, no job’ contracts to require staff get vaccine but lawyers warn they could be challenged in court 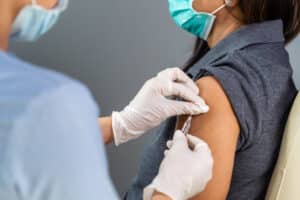 Companies have begun drafting ‘no jab, no job’ contracts to force staff to get Covid-19 vaccinations – despite lawyers warning they likely to be challenged in court.

Bosses in the care home sector as well as large international groups including an energy firm are making ‘risky’ arrangements by insisting staff must be jabbed , top lawyers warned.

It comes as senior ministers have reportedly urged Boris Johnson to consider vaccination certificates in order to get entertainment venues reopened.

Barchester Healthcare, based in London and with more than 200 care homes, said applicants refusing to have a jab without medical reasons would not be hired.

Pimlico Plumbers has also said it would have a ‘no jab, no job’ attitude towards new workers,

The newspaper spoke to law firms – which refused to be named – which said some companies were already looking at getting current employees vaccinated.

A lawyer in the City of London said putting clauses in contracts to force people to be jabbed was risky but easier to defend in the care sector to protect patients.

Another said some multinational companies – such as a large energy firm – are considering the idea.

Mr Zahawi said yesterday that the Government was ‘not planning a domestic passport’.

He told BBC Breakfast: ‘It’s up to businesses what they do, but we don’t yet have the evidence of the effect of vaccines on transmission.’

Downing Street slapped down Dominic Raab on Sunday after the Foreign Secretary suggested documents could be required before going into shops.

Mr Zahawi told BBC Radio 4’s Today programme yesterday: ‘It’s a combination of rapid testing as well as the mass vaccination programme that will get our economy back on its feet and venues open again.’

Meanwhile, senior ministers have reportedly urged Boris Johnson to look into Covid certificate schemes as a way of getting clubs, cinemas and theatres reopened.

One senior minister told the Times: ‘We’re talking about industries that are dying here.

‘In terms of getting live music, theatre and other parts of the entertainment industry back on their feet, it seems an obvious thing to do once the majority of people have been vaccinated.’

However, Mr Johnson is said to oppose Covid passports amid fears that millions of Britons could be cut off from the rest of the population – creating a ‘two tier’ society.

And government sources last night told the Times setting up such a system would be a ‘bureaucratic nightmare’.

It comes as it was today revealed the government is preparing a roadmap out of lockdown with curbs on pubs, restaurants and hotels eased at four-weekly intervals starting with a ‘limited’ Easter holiday – but it could take until July to return to ‘broadly normal’.

The blueprint being discussed by ministers and industry leaders would allow restrictions to be eased only at four-weekly intervals.

The gradual approach means traders will have to wait until at least Easter – early April – for a limited restart.

This is likely to include the reopening of holiday lets and larger hotels, with dining rooms still closed. Sports such as golf and tennis could resume.

Pubs, bars and restaurants will have to wait until early May under the plans, with a maximum of two households allowed to sit together indoors and the rule of six applying outside.

The next stage, in early June, would see the rules for pubs and restaurants relaxed with the rule of six extended indoors.

The hospitality and domestic holiday industries could be allowed to return to normal in July – with social distancing.

It comes as the government is set to unveil a new slogan and the PM plans to send testing kits to millions of homes and businesses as lockdown is eased.

‘Are you ready? Get testing. Go’ will reportedly be a new campaign launched ahead of the reopening of schools next month.

Ministers will not make a final decision on the roadmap timetable until this weekend when they are presented with the latest data on the spread of the virus.

Boris Johnson will unveil the plan on Monday. But the blueprint is the most detailed outline of the Government’s thinking so far.

It appears to confirm that – contrary to the demands of some Tory MPs – the Prime Minister is determined to be cautious, with plenty of ‘headroom’ to adjust to any resurgence of the virus.

The fact that the rule of six and social distancing are expected to remain in force until well into the summer indicates the extent of the worries over new mutations.

The Mail can also reveal that office staff are expected to be told to keep working from home when the Prime Minister unveils his roadmap.

He is not expected to set a firm date for when employees should return to their desks, meaning that the ‘work from home if you can’ message will continue for the foreseeable future.

The rapid roll-out of the vaccine has boosted optimism that Mr Johnson will announce that the long winter lockdown can be lifted sooner than expected.

It was claimed yesterday that the NHS will receive enough vaccine doses to jab everyone over 50, or 32million people, by the end of March – a full month ahead of schedule.

Almost one in four Britons has now had at least one jab and experts yesterday said the UK’s vaccination programme was reducing coronavirus deaths among the over-80s.

However, the blueprint revealed by the Mail today is likely to be seen as more cautious than many in the hospitality and leisure sector were asking for.

They had warned that businesses would go under unless they were allowed to get going again from the Easter weekend.

The new route map, the most detailed outline of the Government’s thinking so far, lays out how vast swathes of the UK economy will reopen.

As already widely reported, schools will reopen from March 8, along with an easing of the restrictions on outdoor exercise and meeting others outdoors, followed by the reopening of non-essential shops at the end of March, or at the start of April at the latest.

Under plans discussed with industry figures, staycations in self-catered holiday lets, second homes or larger hotels would return in the first half of April, potentially just after Easter.

Outdoor leisure, such as theme parks, public gardens and zoos, and outdoor sports such as golf, open air gyms and tennis would get the go-ahead at the same time.

This ‘soft opening’ of the economy would then be followed with a loosening of restrictions every four weeks if case numbers and hospital admissions continued to fall.

An industry source said: ‘The suggestion is that we would broadly go back to normal in late June or July.’

Other insiders believe decisions could be taken at three-week intervals, as this is the time that it takes for the data to demonstrate the effect of the lockdown loosening.

A full reopening is not expected until May at the earliest, with Mr Martin warning the industry is ‘on its knees’ and venues must be allowed back to save jobs.

Mr Martin spoke of the huge contribution pubs make to the economy, saying: ‘In the financial year to July 2019, before the pandemic, Wetherspoon, its customers and employees generated £764 million of taxes – £1 in every thousand collected by the UK Government.

‘Many people have correctly pointed out that the three lockdowns of the last year have been a disaster for the hospitality, retail, arts and entertainment industries, but our calculations show that they have been an even bigger disaster for public finances.

Meanwhile, some companies have begun drafting ‘no jab, no job’ contracts to force staff to get Covid-19 vaccinations despite lawyers warning they are ‘risky’ and likely to be challenged.

Bosses in the care home sector as well as large international groups including an energy firm are making arrangements, top lawyers warned.

Office staff are set to be told to keep working from home even as other lockdown restrictions are eased.

Boris Johnson is not expected to give a firm date for when workers will return to their desks as he unveils his plans for a return to normality on Monday.

Read more:
Companies draft ‘no jab, no job’ contracts to require staff get vaccine but lawyers warn they could be challenged in court