THE Philippine trade deficit widened to a nine-month high in December as month-on-month imports went up, potentially indicating improved consumer imports as economic activity picks up, data from the Philippine Statistics Authority (PSA) showed on Wednesday.

Preliminary data from the PSA said that the value of merchandise exports fell 0.2% to $5.7 billion in December, reversing the 4% increase seen in November.

This drove the full-year export tally to $63.8 billion, or 10.1% lower than 2019 exports, better than the Development Budget Coordination Committee’s (DBCC) 16% decline estimate for 2020. 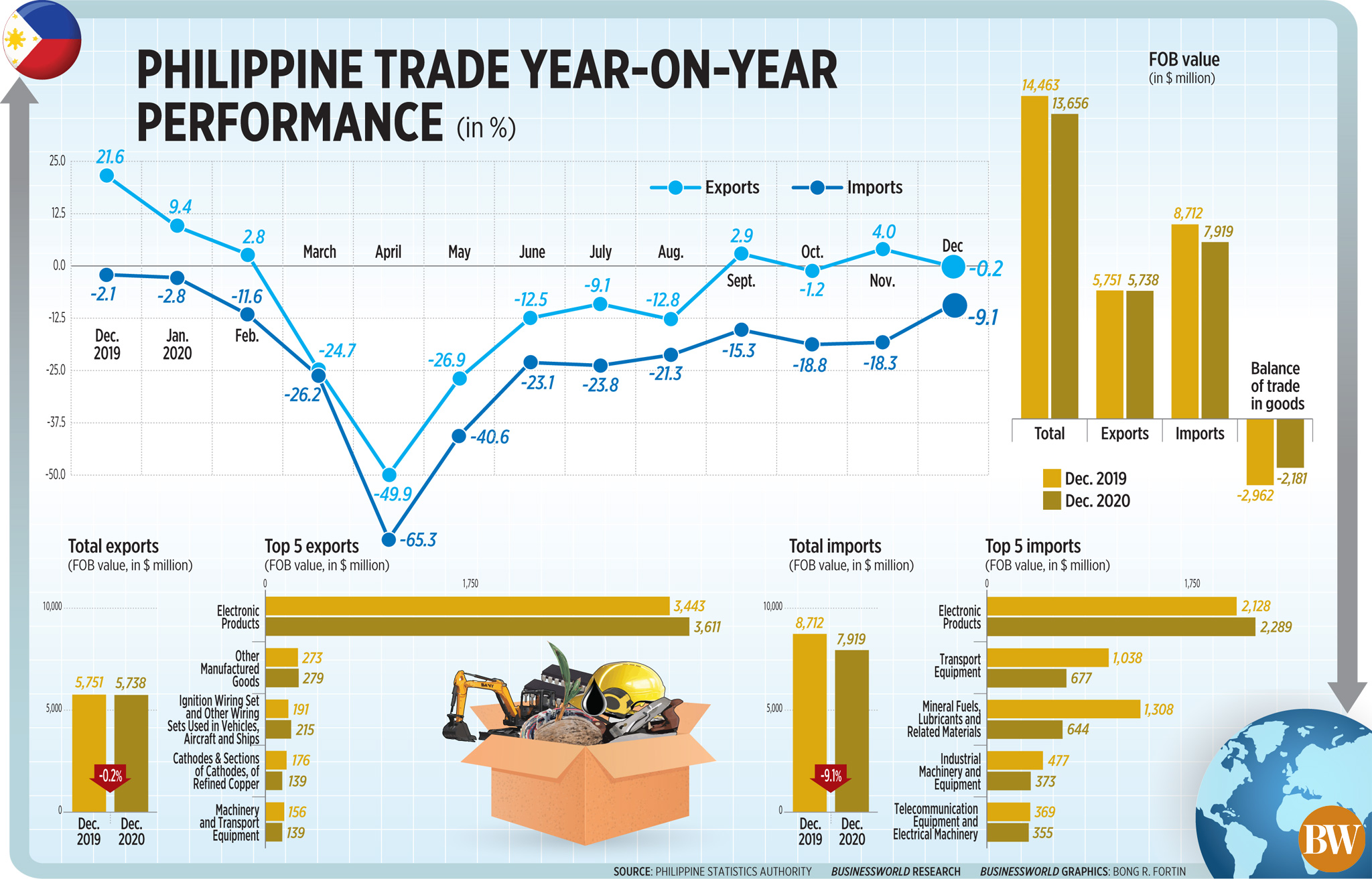 Merchandise imports shrank 9.1% to $7.9 billion in December from the same month in 2019 as it registered a year-on-year decline for the 20th straight month. But imports had improved month on month, rising 4.5% since November.

The trade-in-goods deficit in December as a result amounted to $2.18 billion, down from the previous month’s $1.73 billion but still narrower than the $2.96 billion in the same month in 2019.

Meanwhile, imports of capital goods, which accounted for 34% of December imports, fell 12.5% to $2.7 billion compared with the same month a year earlier. Imports of mineral fuels, lubricant, and related materials slipped 50.8% to $644 million.

Imports of raw materials and intermediate goods went up 7.3% to $3 billion, while imports of consumer goods increased by 1.5% to $1.45 billion.

He noted the continued decline in imports was caused mostly by shrinking capital and fuel imports.

“Of note, however, was the surprise gain in consumer imports, eking out a 1.5% increase for the month which could give an indication of some resumption of economic activity as select lockdown measures continue to be relaxed,” he said in an e-mail.

According to Rizal Commercial Banking Corp. Economist Michael L. Ricafort, exports could have also been subdued due to a stronger peso exchange rate and slow recovery from export destination markets that saw a renewed surge in coronavirus disease 2019 (COVID-19) cases.

He said measures to reopen the economy supported faster monthly growth in imports.

“Resilience in foreign direct investment data could have also led to faster growth in imports, especially for capital equipment and other production inputs,” he said.

“The net effect of these trends will mean that the 2021 trade deficit remains below the pre-COVID-19 of $3.1 billion, which in turn would be supportive of (the Philippine peso) as corporate demand for the dollar remains soft,” he said.

Milo K. Gusaninghe, JPMorgan EM Asia Associate, said in an e-mail that slow economic recovery would mean that a widening of the trade deficit would materialize in the second half.

Imports and exports could pick up this year, Mr. Ricafort said, if economies recover and the number of COVID-19 cases fall. Government spending on infrastructure could increase capital equipment and construction materials imports, he added.

“An offsetting risk factor is the new variants/strains of the coronavirus that are more contagious, leading to some lockdowns and travel restrictions in Europe and in other countries around the world, including the major export markets/trading partners of the Philippines, thereby could slow down the economic recovery prospects, as well as the pick up in demand for Philippine exports and imports,” he said.